A ShrimpTails Special: The AIC boot camp and final pitches

Sophia is the new deputy Editor-in-chief of ShrimpTails, the Seafood Trade Intelligence Portal shrimp sector magazine. She has a background in journalism and reporting on the fisheries sector.

Diamonds in the Rough: Aquaculture Innovators Transform to Business Leaders

Almost an hour boat trip from busy Jakarta, finalists and coaches for the Aquaculture Innovation Challenges were whisked away to the beautiful island of Putri. It was the perfect way to start a week full of hustle,  working to improve the business plans of the five innovators for the live final pitching event on Friday, June 28.

After two rounds of submissions, an international jury of experts selected five finalists:

The ideas are already out there, innovations that have a huge potential to impact the shrimp sector but need some polishing –  diamonds in the rough. Over the course of the week, these ideas were transformed into stimulating plans that can hopefully engage industry players and investors and achieve commercial viability. 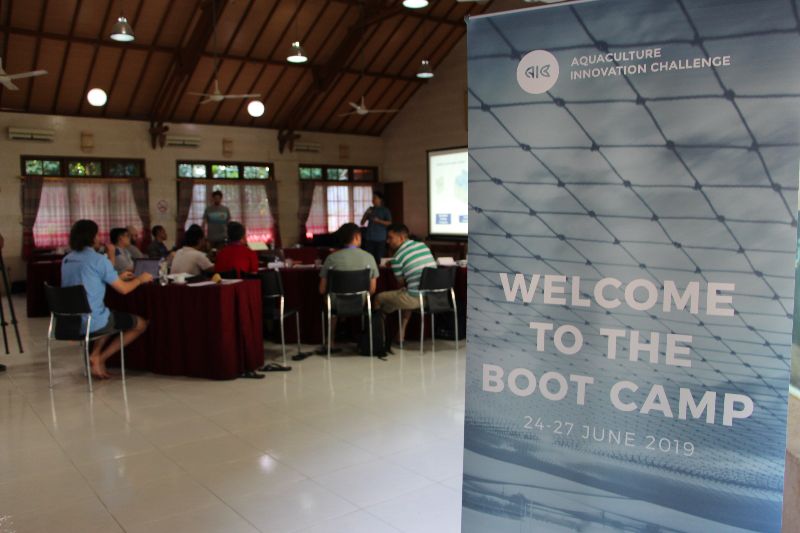 On the first day, we talked about how storytelling plays a role in branding the innovations for presentation to potential investors. James Wright, editorial manager of Global Aquaculture Alliance, who also has vast experience in journalism, talked about how to build a good story and engage your audience.

“You have to be able to hook your investors with a simple, concise message. You have to say something memorable and it has to come from your heart. Tell a good story. What does it mean to you personally and what does it mean for your audience?” Wright said.

In this session, I also coached the finalists on how to use social media to their advantage and how to handle negative criticisms or bad press. To prepare them for the final pitching event, we came up with an idea of producing an elevator pitch- a 30-second spiel to persuade, intrigue or to excite your audience about what your product is all about.

To inspire the finalists, I demonstrated an elevator pitch about ShrimpTails and the work that we do. The key messages I tried to portray is the importance of engaging the audience by giving a clear introduction about the innovation and its impact on the industry in general. In life, opportunities do not always come in neatly-wrapped packages. You have to make them for yourself and a huge part of it is being able to communicate your idea properly. 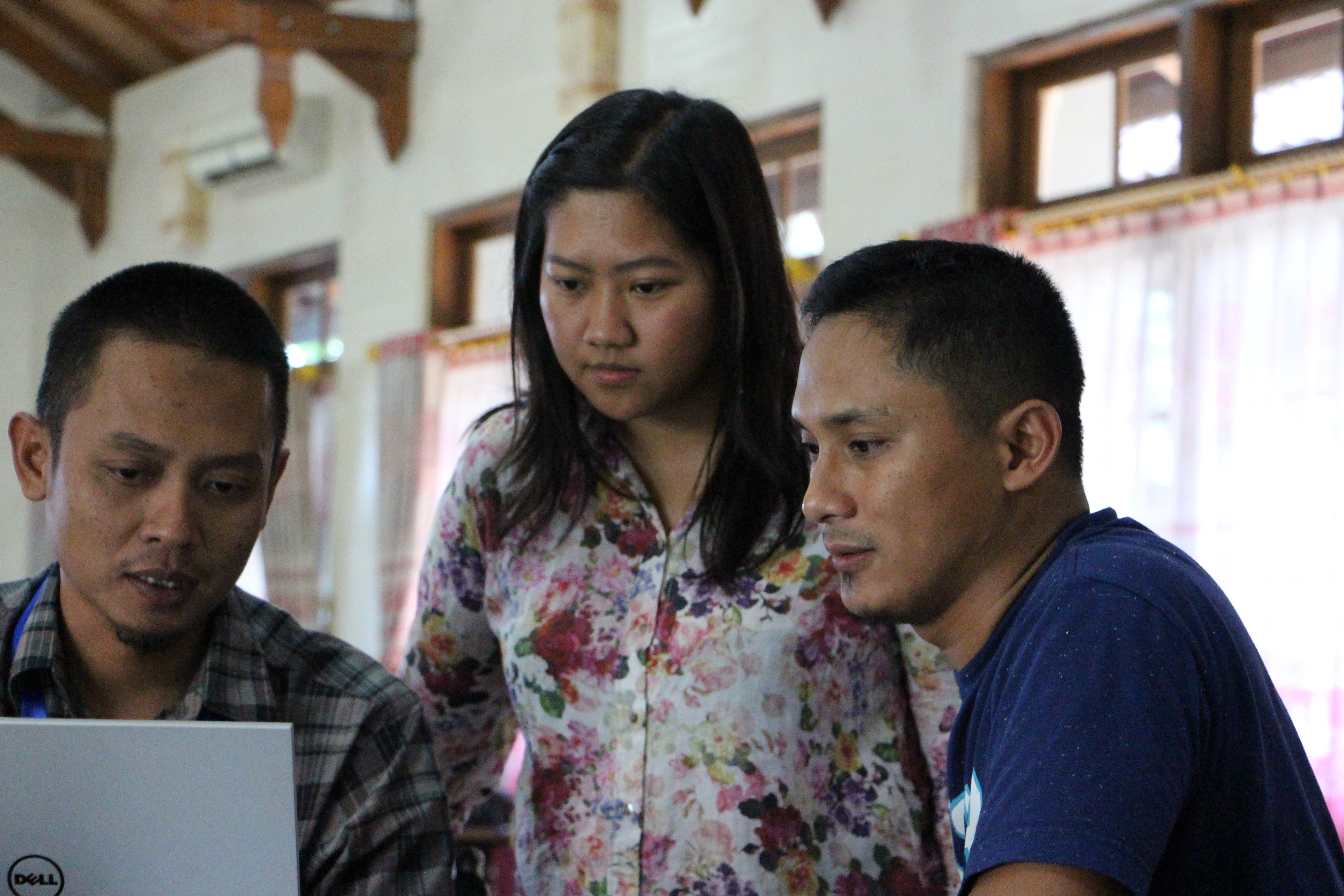 Some have struggled with the delivery, the content and engagement with the audience, but by the end of the day, the finalists were able to convincingly describe the core problem they want to solve and their proposed solution in 30-seconds.

On the second day, coaches focused on business strategies and models that can help them refine their pitch decks. Georg Baunach of HATCH Blue, Alban Caratis of Fresh Studio, and Tom Prins of Aqua-Spark talked about investments and gave tips and tricks on how to make a convincing pitch to investors and sponsors. Many of the tips focused around building a story about a singular, precise problem and using their proposed innovation as a solution.

“It is important to understand the real problem and the motivation behind the idea”, Baunach said.  “You have to convince them that your technology matters to the farmers. You have to know your customer segments. The value chain of the shrimp industry is very complex, thus identifying the problem you want to solve is very crucial in developing your product,” Caratis, fisheries and aquaculture manager of Fresh Studio, said.

The finalists also received a background talk about the Indonesian shrimp industry and how it has evolved over the years from shrimp industry expert Agus Somamihardja of the Institut Pertanian Bogor (IPB), one of the organisers of AIC Indonesia. 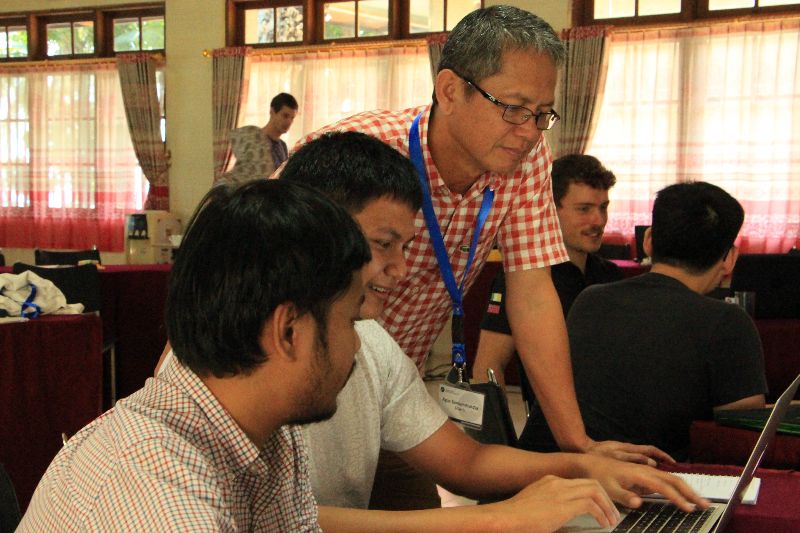 Hustling Before the Final Pitch

During the workshops, the innovators have once again presented their slides, but this time, they were under considerable scrutiny from their co-presenters and the coaches. The participants were assessed based on the delivery, pace, and the quality of the presentations, and more importantly, the content of their business plans.

Tom Prins of AquaSpark also gave a short afternoon session on appealing to and communicating with investors, starting from the financial requirements of their innovations, capital needed to start and their expected return on investments.

“The progress has been amazing. It’s very impressive these companies have come in a short period of time from a rough idea to commercialising their businesses toward a sharp focus on their business model and the exact needs and next steps that they have to take,” Prins said.

Achmad Jerry, an engineer and a shrimp farmer from Venambak, the team that created the low-cost ammonia reducer, said that the workshop helped him improve their business plan,  making it more structured for the presentation on Friday. “The goal now is to make the plan clear, simple and convincing,” he said.

As one of the coaches, my focus was on the importance and use of media in effectively communicating their ideas. I am very personally proud of how far they have come since the beginning of the boot camp. By asking the right questions, and getting constructive criticisms, the innovators were able to sharpen the focus of their plans.

What I really found inspiring is that fellow competitors have also been working hard to provide feedback to the other teams. Even as they are competing against each other, the overall goal to improve each other’s work and to contribute to the betterment of the shrimp industry is evident during the workshops.

Everyone is a Winner

As the finale nears, you can smell the anticipation from the finalists. Some have been pacing their steps on the stage, practising their pitch while others are talking profusely to the coaches, desperate for last minute tips or some locking themselves in their rooms, focused on doing their presentations. The innovators went through this phase differently, but so did the coaches. So did I!

On June 28, the finalists lit up the stage with their confidence and pride as they delivered their business pitches. The improvements made throughout the boot camp were clearly reflected.  I was impressed by the eloquence with which they were able to answer the questions from the judges and audience. They are experts in their own innovations – and the coaching helped them to translate this during their presentations and the Q&A.

WeTech’s pitch for their solar-powered aeration (SUPA) device, won them the chance to participate in the Hatch Blue accelerator programme, adding up to a cash and in-kind prize, worth $100,000. Seable’sautomatic shrimp feeder for hatcheries pitch has won them $10,000 cash prize sponsored by the Global Aquaculture Alliance.

Both teams will also be supported to travel to this year’s Global Outlook for Aquaculture Leadership (GOAL) in Chennai, India where they will. Where the representatives will pitch their innovation, at GOAL, in front of global industry leaders and have the opportunity to network with relevant stakeholders. 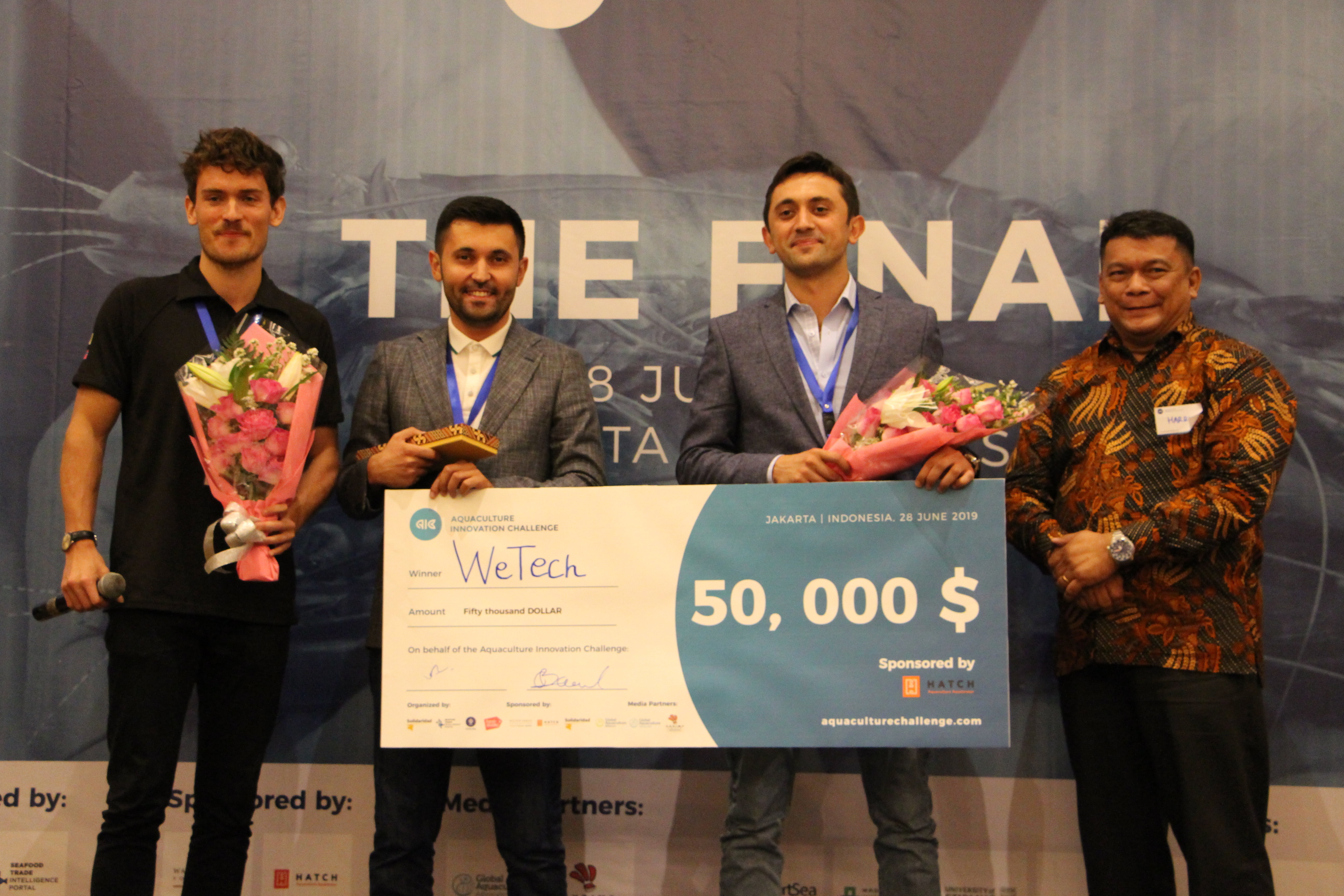 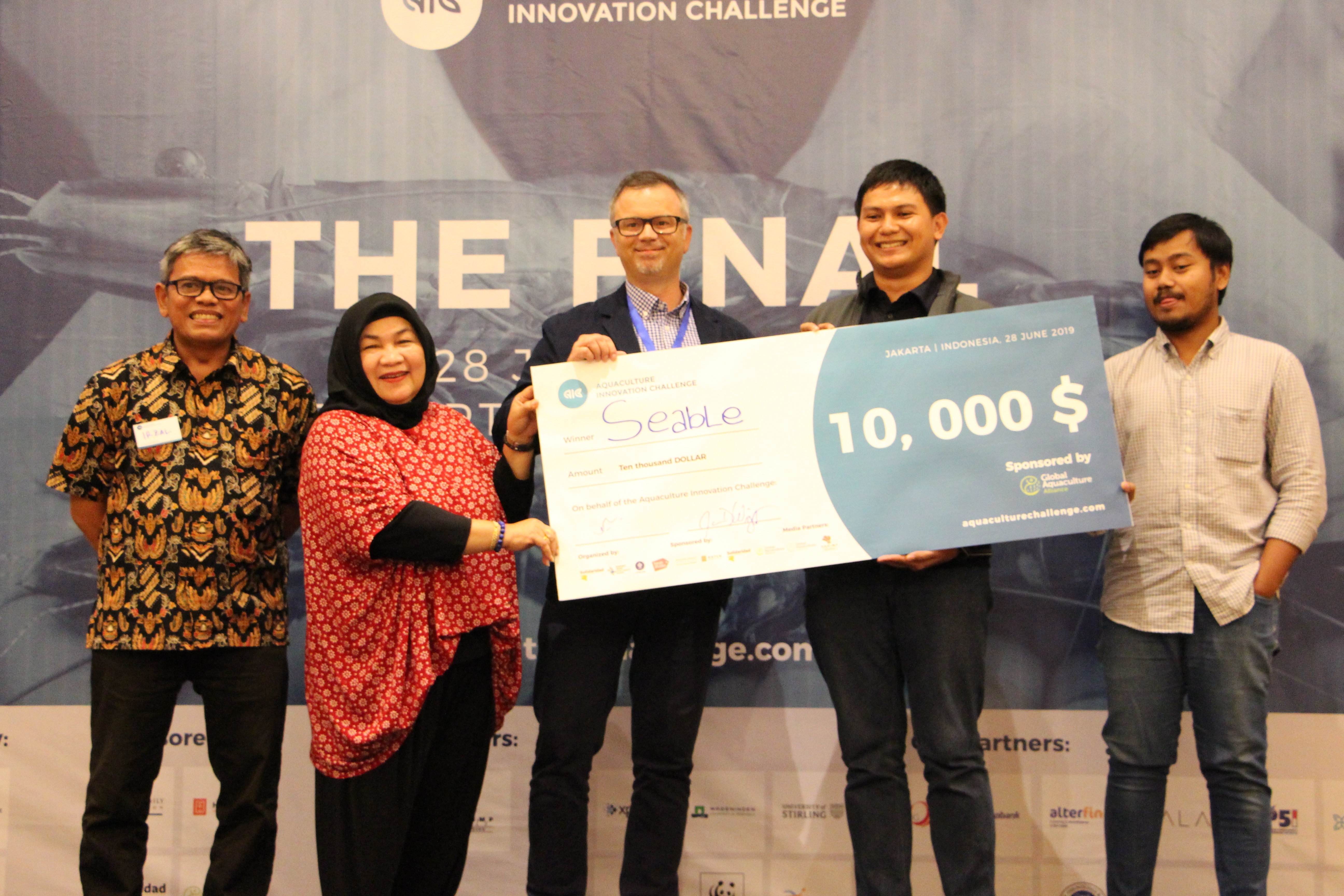 “This is very important to the small starting farmers and also for Indonesia’s economy. The aquaculture is challenged by many issues, particularly in building infrastructure and managing the health of species. I hope the winners will use this award to start their proposals,” Delima A Darmawan, Chairman of Solidaridad Network Indonesia, said.

I usually ask formal questions during interviews, but some of the most heartfelt answers from the finalists I got over a cup of coffee, or during dinner when everybody is enjoying their nasi goreng and sambal, and sometimes, even when we were watching the sunset from the shore.

Despite not winning the prizes, Jerry (Venambak) believed he still won a great deal, as the coaching sessions helped him to, not only to build a business plan for their product, but also to communicate his ideas better, without wildly moving his arms around the stage or being distracted by the slides, which he struggled with on day one of the boot camp.

Yushinta and Nita (Vitomolt), both professors in a Hasanuddin University in Makassar, Indonesia, were happy their products are not only being discussed within the confines of the classroom but are now being developed as a viable business idea. They both wanted to visit Mecca someday to give thanks to Allah for the blessings they have received.

Evan (Wittaya Aqua) was excited his fellow Canadian won the Hatch prize, enormously proud that Canada is upping its game in terms of contributing to sustainability in aquaculture. Their team is looking forward to expanding their business in Singapore and other Asian countries.

Agi (Seable) was both nervous and excited after the team received the GAA prize. Now their prototype can actually turn into a reality. He said he was going to party that night – I wonder how it went.

Kamran (WeTech) would be travelling back to Canada for more than 20 hours, but he is looking forward to returning to Indonesia to do market research and tailor their product for the Indonesian farmers.

It was in these little moments where their stories really shine, and where their passion translates into words. They may come from different backgrounds and walks of life – an engineer, a farmer, a teacher, a biologist – but they all share the same goal of improving the aquaculture industry.

“The AIC has two sides: one side is that it shows young, ambitious, positive people that their ideas matter and they can share their ideas. Secondly, for an industry that’s so exposed to negative media and a lot of challenges in sustainable development, I think it’s crucial to have  positive exposure to strengthen the image and show the amount of passion, energy and innovation that’s there,” Willem van der Pijl, director of Seafood Trade Intelligence Portal, said.


Interested in watching the final pitches? Watch the video– all the action starts at 36:00.
Free
REGISTER YOUR FREE TRIAL MEMBERSHIP
An ever-changing shrimp industry is challenging. Receive our updates and you will always be up to date.